Gold Mining In The Yukon 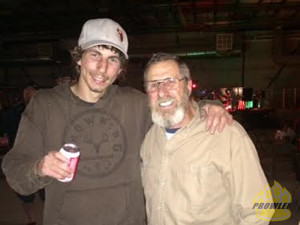 Mike Capuano of Colorado called me today about his Gold Mining Season up in the Yukon and shared his story about his adventure. Mike had bought our rubber tracks for his Bobcat 341, and I asked that when he returned that he send me some pictures of his mining season and I would share it with our other customers, and readers. He done just that, so I want to share this with everyone. I hope one day I may be able to have this same opportunity myself. Enjoy!


After our 4 month journey in the Yukon of Canada, our Klondike Gold Mining experience proved to be better than just “OK” and our hard work and preparations were worthy of a “Job Well Done” ( if I say so myself). The home built gold trommel and sluice kicked butt allowing a through put of up to 23 cubic yards of pay dirt per hour and recovering over 13 ounces of the yellow stuff that made this place (All Gold Creek) and Dawson City so famous in the rush of 1895-1902.

We dry camped the entire time but never went without hot showers, clean clothes, a warm bed and plenty of food. We were also treated to the viewing of mother nature at her best, not to mention the Moose, Black and Grizzly Bears that inhabit the area as well.

We put in our work week Monday thru Saturday, our hours were as they came together and usually on Sunday’s, we made our trip in to Dawson City for groceries, potable water and any needed supplies to help sustain our operations. We even attended the Discovery Days festivities and did the Miners Ball (dinner, dance & social) meeting up with and taking some snap shots side by side with Parker Schnabel from the Discovery Channel Gold Rush series. He is actually quite tall and speaks right at you instead of down to you. His fame on the show has not overtaken his warm personality, yes!, he does have a warm personality.

At other times during our visits to Dawson we were able to see Ole Jack Hoffman running errands and other members of the Hoffman’s crew/ “Gold Rush” cast as well.

All in all, our convoy of machinery and supplies traveled from Colorado to All Gold Creek without a hitch as my two son’s each towed large equipment trailers there for us and then stayed a week to help us unload and set up our camp. We wound up doing prospecting work from May until mid July when we actually then started our full on excavation process and placer mining operations. 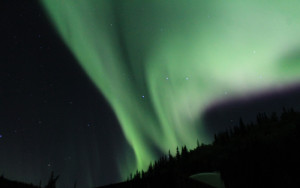 Being so close to the Arctic circle (150 miles) we also had our first freeze in August and only saw about 2 day’s of over 80 degrees during the so-called Spring and Summer time frame. Our many day’s of near 24 hour daylight and then the shift to darkness in September helped usher in the awesome viewing of the Northern Lights (Aurora Borealis). When we left near the end of September, it was freezing every morning and we were lucky to see high 40’s during the day.

We will be going back next year, and taking with us another piece of needed equipment (Front end Loader) which will allow me to keep feeding the trommel with the Excavator instead of stopping every
1 1/2 hours to replenish my supply of piled pay dirt and to move the many tailing’s that build up during the process (Janna’s job). This arrangement should help us increase our through put substantially over the 1,800 cu yards of pay dirt we processed in 2014. Our goal for 2015 requires us to process a lot more pay dirt and to recover a considerable amount more of gold than the 13 ounces we captured in 2014.

Anyway, this crew of “Senior Green Horns” had a wonderful and memorable experience and adventure while still being able to kick a little butt in the Klondike Gold Fields of the Yukon.