Heat, friction and environmental hazards are the enemy when it comes to rubber track longevity. At Prowler, we are keeping ahead of the competition by supplying one of the industry’s highest quality rubber track systems for Compact Track Loaders (CTL). The manufacturing process follows strict ISO 9001 Quality Standards. Through extensive research and design we have continually manufactured CTL Rubber Tracks that provide reliable service and help lower your operating cost. Here are a few of the ways our CTL track system helps minimize the hazards you and your machine encounter

When the new Prowler AT series track was developed, the end result was a track that provides remarkable performance over many surfaces. The AT track has superior traction and performance in dirt, mud, snow, and sand. This same track is able to tread on lawn and landscape conditions without excessive scarring. This makes it excellent for turf applications.
Suited Applications: Clay, Dirt, Snow, Mud, Turf

Prowlers C-Lug is the most aggressive staggered block track in the industry, yet provides a smoother ride. The C-Lug style is better known as an OEM track for Manufacturers like Bobcat, Case, and Mustang. This is an excellent track for operating your Compact Track Loader (CTL) on soft soils such as clay and mud, but continues to provide maximum traction and handling performance over abrasive surfaces such as gravel and concrete.
Suited Applications: Clay, Dirt, Gravel, Highway, Mud, Turf

Extreme Tread is designed for extreme terrain conditions. The performance of the EXT Series is unmatched in our industry. Designed to be unstoppable in the most demanding situations, Prowler’s new EXT Series rubber tracks have the most comprehensive performance design ever offered to the compact track loader. The EXT Series came as an answer to our customers’ constant request for something “out of the ordinary” to use in “out of the ordinary” conditions. The EXTreme Terrain Series Track is designed for hillside, swamp, sand, or anything else that dares to pose a challenge to it.
Suited Applications: Clay, Dirt, Snow, Mud

HELP TOPIC: Which Tread Pattern Should I Choose For My Track Loader

Why Choose Prowler Rubber Tracks For Your Compact Track Loader? 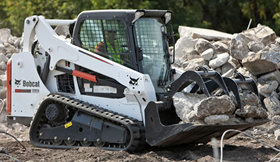 Prowler’s continuous “splice free” steel cables maximize the overall strength of the track, and keep it from binding or creating a “wave” in the track during the curing process. Prowler Compact Track Loader (CTL) rubber tracks also utilize all natural rubber specially blended with selected synthetics that provide the following benefits:

When you buy rubber tracks from Prowler, we will provide you with the knowledge and resources needed to select the right track for your Compact Track Loader and work environment.

We take great pride in providing exceptional customer service, and “We Always Stand Behind Our Product”. Every CTL rubber track is backed by a 1 year/1000 hour warranty. 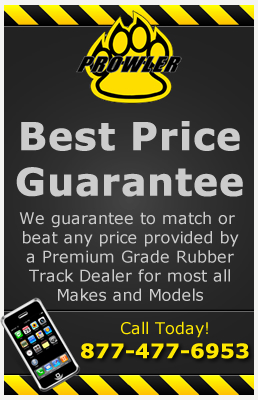