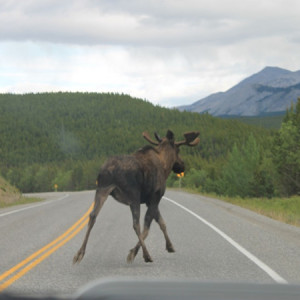 On our drive from Cedaredge, Colorado through Alberta, British Columbia and the Yukon, we were treated to seeing lots of wildlife such as Moose, Black Bear, Caribou and Mountain Goat. Our 2015 season started out pretty well as we arrived at All Gold Creek, Yukon in early June. There were many chores to accomplish before any mining could take place, some of which were to trench in and lay pipe our spring fed water reservoir which I had built last season that supplies all of our camp water requirements for our clothes washer and to our newly constructed Green House. Other chores were to install the mechanical improvements that I made over the off season for the Gold Trommel (wash plant) to help increase its capacity and efficiency over the 2014 season. In addition, we made several trips to Dawson City for hardware, supplies and to fill our 275 gallon drinking water totes and refill our 100lb Propane Tanks, I also had to service the Bobcat #341 Excavator, which survived the super cold (-50 deg F) 2014 Yukon Winter without a hitch. It took all of about two weeks to get all these things done before we could actually start gold mining. 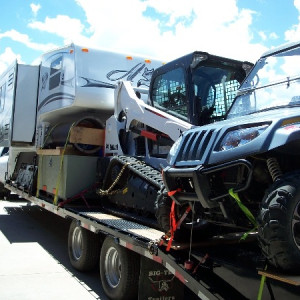 This year, we brought along my new Bobcat T590 Track Loader (supplied by Bobcat of the Rockies – Grand Junction, CO.) to aid in moving tailings and to re-supply excavated pay dirt to the staging area where we feed the trommel (formally all done by me with the excavator). This is now Janna’s job as she has become somewhat of a hack with the operation of the Loader (did I mention it is heated and air conditioned as well, which Janna adores). This has really proved out to be a good move as I can now feed the trommel continuously until such time when more pay dirt needs to be excavated from the cut, it does add some overhead fuel and maintenance expenses however. My good friend Todd Swift at Ward Equipment Sales also supplied us with a new set of Prowler pallet forks for the Bobcat Loader which made moving palletized and other items a walk in the park. He also provided us with a new set of Prowler rubber excavator tracks for the Bobcat 341 in 2014 which have proven out to be a tough addition against the brutal Yukon terrain. If you ever have a need for Mini Excavator or Skid Steer supplies, parts and attachments, just give Todd a call at 877-477-6953 or visit their web site at prowlertracks.com and he will fix you up with the best deal around and Free shipping too. 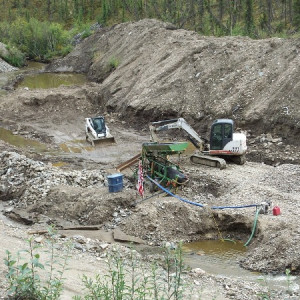 In picking up where we left off last year, we had to excavate several hundred yards of pay dirt from our cut in the place we named “The Hole”. We named it that as it is in an area down low near the creek which gets very little sunlight and only late in the morning does it show keeping “The “Hole” a very cool place. Our gold recovery was looking pretty fair until our cut ran out as we hit frozen ground (permafrost) once again.

Marcel (the claim owner) and his crew had began the process of clearing the cut’s upper surface thawed permafrost and to rip the frozen underlayment but it just wasn’t going to provide us with the good paying dirt anytime soon or even this season despite their efforts. We wound up moving out of this cut area to other locations upstream but the gold, although there, just wasn’t there in a quantity needed to make it economical to mine. We are hoping that our original cut will be thawed, cleared and mineable for the 2016 season.

Our final tally this season, and after coming home early, was 2,131 cubic yards of dirt processed with about 10 ounces of gold recovered which just about covered our overhead expenses, royalties to Marcel and travel expenses but unfortunately didn’t put anything in our pocket for the hard work performed. Such as it is, gold mining is a gamble at best and is certainly not an easy task, which Janna and I have learned. Not to be discouraged however, 2016 will still be a fun adventure with the prospect of bringing home a pile of gold which is still very much in the cards.

Also this year, we were able to meet and speak to Freddy Dodge (Gold Rush cast member) who we bumped into and had good conversation with at the Dawson Hardware Store. What a great person and a fellow Coloradoan to boot. We also had Tony Beets visit our camp to see Marcel but we were only able to see him pass us by as he left the camp. His wife, Minnie and one of his sons were seen at the Yukon miners Ball in Dawson as was Chris Dumont and Parker Schnabel. Later on in the season, my girlfriend Janna and a few of the other Girls from camp on their “Girl’s Night Out”, had cocktails and enjoyed the entertainment at Girdle’s in Dawson and met up with Todd and Jack Hoffman, Freddy Dodge and Dave Turin and their wives. The girls were asked to sign waivers as the Gold Rush film crew was there filming the interaction with the cast members. The Girls seized the opportunity, and posed with some of the cast taking some great memorable pictures. Who knows, they may show the exchange on the air sometime on one of the Gold Rush episodes or “The Dirt”, wouldn’t that be something!

Until next year, Regards and God Bless!