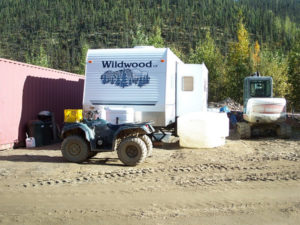 My 2016 Mining season in the Klondike (Yukon Territory, Canada) was very successful despite only being able to sluice for 47 days due to equipment failures. I’ve been back for a few weeks now after leaving my travel trailer there at All Gold Creek and bringing home the wash plant / trommel in tow.

Early on, I broke a hydraulic cylinder rod on my Bobcat Excavator and was down for almost a month waiting on a new one from Chicago. I also had to leave the Yukon early as the wash plant / trommel barrel was giving me trouble due to bad thinning of the perforated material section. This is where the 1/2″ minus concentrates fall through to the sluice box after the wash. Initially, I only used 14 gauge steel for the barrel when in hindsight, it should have been much heavier (my Bad!!). Even with the thinner steel, the home built trommel lasted three grueling seasons with a throughput of just under 10,000 cubic yards.

Since there isn’t anybody here in my small town that has the capability of roll forming 3/16″ (7 gauge) HRS for a new barrel, I let out a contract to a shop in Toledo Ohio who will roll form and also seam weld the sections using an automated seam welder. While waiting for the new barrel, I am in the process of rebuilding and retrofitting the rest of the machine with some enhancements that should make it a lot more efficient and reliable and with the toughness that’s needed to meet the harsh Klondike Placer materials.

Even with all the work stoppages and breakdowns, I still managed to recover over 53 ounces of gold this season which more than covered all my expenses including the round trip there and back and allowed me a nice chunk of cash for my bank account. Did I mention that I did this season by myself, that’s right, I rolled alone this year but I was mining very close to the claim owner and his crew and had their support when I needed it.

I didn’t frequent Dawson City as much this year so I didn’t run into any of the cast members of “Gold Rush” as in the past years but Marcel (the claim owner) and I paid a visit to one of his long time friends just outside Dawson…..Tony and Minnie Beets.

It turned out to be an hour long sit down with just the four of us drinking coffee and “talking stuff” without the presence of Discovery Channel camera’s and producers. And yes!, the bleeps were sounding just as much in person as you hear them on T.V., maybe more….lol.

All in all, it was a great trip and a very successful one as well. If I didn’t have the breakdowns I would have recovered a lot more Gold but I am very pleased and needless to say, I am excited about next year.